Some days I find myself so tense with worry for anything and everything that could happen to my babies, that my entire thought process is clouded.  The day I walked into a coffee shop to meet with Jessi was one such day.  Over the course of ninety minutes, this woman walked me through her own story as her life lens went from being jaded to grateful, fear-laden to faith-filled.  As she breathed truth into my weary, worrying mind, my own gaze was lifted toward heaven, and my fears became strangely quieted.

I play out my fears in my mind; Jessi’s fears were played out before her eyes.  But the faith she walks in applies to all fears- both real and imagined.  It is a faith that rests in something greater than health insurance, vaccinations, and the long list of preventative measures we tend to hope in.  Jessi’s faith is in the immovable, unchanging One: Jesus Christ…

“FEAR.  This has been my life.  I know nothing but fear.  In my fallen mind, all I believe is that my worst fear will be my reality.”  Jessi Licato goes on to explain the root of this paralyzing struggle: “For most of my life, my fears became my reality.” 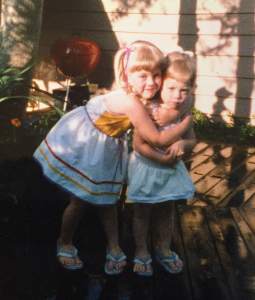 Jessi describes her childhood as naïve and charmed.  But what snapped her out of this blissful oblivion is a nightmare none would wish upon any teenager.  When Jessi was fifteen years old, her best friend, roommate, and big sister was diagnosed with a brain tumor.

“Malignant” and “terminal”, once foreign concepts, now represented the interruption to her happy youth, the source of the all-too-tangible pit in her stomach.  Ultimately, they would describe the four short months she had to say goodbye and the eighteen short years her sister had on this earth.  Brittney bravely and peacefully faced her stint with cancer before being ushered into heaven.

But while Brittney was welcomed by her Heavenly Father into her eternal home, Jessi’s family proceeded to unravel.  Unbeknownst to her, her parents had been grappling with her dad’s extramarital affair when her sister became sick.  Shortly after Jessi mourned her sister, she found herself mourning her parent’s marriage as well.   Her father moved away, abandoning his family in their bereavement.  Her mother turned inward as she grieved over her elder daughter.  Jessi says of this season, “I felt like my family basically disappeared.”

On top of losing the family she once believed to be concrete in her life, Jessi was also sexually abused by a relative in the midst of this trying time.

In the course of one year, Jessi’s world had turned to glass.  Her ability to trust was being 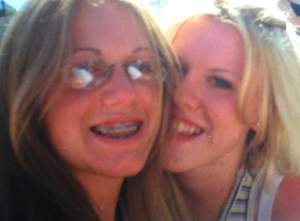 replaced, brick by brick, with a wall of fear.  There was not one person she could trust.  Not one relationship left unbroken.  Not one promise, in her mind, able to stand.  This cursed, broken world no longer concealed its sting.

Instead of looking to God to use the brokenness, Jessi stuffed it all inside.  It was all she could do to keep putting one foot in front of the other through this world she now painfully knew to be fragile.

Under Control… Or the Illusion Thereof

Jessi attended Bible School after high school, where she deepened her commitment to Christ.  And yet, there was still a level on which she refused to work through her anger over what had been and her fear over what could be.  She kept her heart and mind distracted from dealing with these long wrought wounds, unable even to fall asleep without watching TV or reading, lest her thoughts wander down every possible calamity and the ways in which she must prevent them.

In 2008, God brought an old high school crush, Jason Licato, back into Jessi’s life.  One year later, they stood facing each other at the altar. 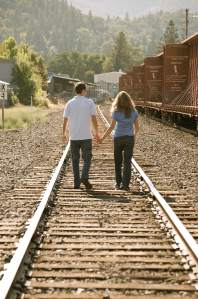 Like every other human who has stood at the altar, Jessi brought baggage into her marriage.  But her particular burdens weighed heavily on her perception of marriage and relationships in general.  For while her wedding guests witnessed vows of commitment and trust, Jessi began an internal countdown toward the day her husband would surely break his promises.  Her guests observed a family gathered for gleeful celebration, but Jessi saw a family that had failed to be. Her guests watched the butterflies being released in loving memory of her sister, while Jessi remembered the year her world crumbled beneath her.

As their family expanded at the birth of their son, Isaac, and eventually with their daughter, Ellisyn, Jessi only became further wound up in anxiety- constantly awaiting tragedy around the bend.  Instead of entrusting these gifts to the Lord and delighting in the Giver, she kept a white-knuckled grip on what she knew could fall apart in an instant.

Fear can only hover beneath the surface for so long, though, before it inevitably begins to suffocate and the soul cries out for air.  Jessi had managed to operate under denial for fifteen years before this cry became irrepressible.  Between her anxiety attacks, mistrust toward her husband, and the increasingly painful thoughts of losing those she loved, Jessi knew she had to reach out for help.  Suddenly, it was all too obvious that time is not the greatest healer of wounds- Christ is.  And He had been waiting to gently work through her pain.

Initially, Jessi was hesitant to voice the turmoil within to anyone but her husband.  Jason had been a rock for Jessi through her struggling, patiently absorbing her lack of trust while she worked through her past.  In a time when she was unable to see God’s goodness, he portrayed God’s grace and longsuffering to her.  Upon his persistence, they approached the Heritage staff for guidance, and were directed toward a Biblical counselor.  Thus began the process of burying her fears in the faithfulness of her Father.

“Therefore let those who suffer according to God’s will entrust their souls to a faithful Creator while doing good.” (1 Peter 4:19)

How can one entrust all they hold dear into the hands of another?  How is it possible to be freed from the dread of disaster? Only Perfect Love is capable of casting out fear. (1 John 4:18

Jessi had spent much of her life so preoccupied with a sense of foreboding, that she had failed to develop a greater awareness of this fear-crushing, courage-inducing Perfect Love.  Oh sure, she believed that God was working.  She felt the discomfort as He persistently laced His thread of holiness through her life.  She cringed in terror with each stitch, fixated solely on the “piercing” of the needle- the fiery trials, the acute pricking, the ripping from her hands.

But then God lifted her eyes… He showed her the hand that held the needle… His hand: pierced through, painfully and personally, for her.  Once Jessi’s eyes were taken off the horrifying what-ifs, she was enabled to see the goodness of those hands.  She became aware of the beauty with which her Author and Perfecter was lovingly weaving a pattern of faithfulness throughout her life… There was a pattern.

Once Jessi allowed the love of God to flood into her heart, her eyes were opened to a new 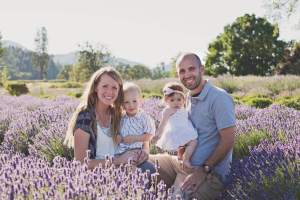 ability to trust God- even with those events she could not explain: “I see [God] did provide people to be His hands and feet. I do see He has used bad for good. HE REALLY NEVER DID LEAVE ME OR FORSAKE ME. HIS PLANS DID GIVE ME A HOPE. HE REALLY IS FAITHFUL!!! Trusting in Gods character, I can trust my future and the future of my loved ones.”

Over the course of the last year or two, Jessi has been discovering a peace she previously had not known- the peace talked about in John 16:33: “I have said these things to you, that in me you may have peace.  In the world you will have tribulation.  But take heart; I have overcome the world.”  This newfound peace cannot be found in a loyal husband or healthy children.  It can only be found in the Everlasting God.

No longer do the whispers of Jessi’s past and the threat of her future drown out the joy of the present. Jessi rejoices that, “God has been gently showing me that fear is a lie and every part of it is from the enemy.”

With the support of her husband, counselor, and church family, Jessi continues to increase in faith and heal from the devastation her childhood lent her.  Even so, Jessi’s journey toward entrusting her “all” to Christ will not be complete until that day she looks upon His face and her fears are silenced, once and for all. For now, she strives to trust God more.  Daily, she fights the temptation to turn her eyes back to the possibility of pain, the potential to be yet again pierced.  Daily, she sets her gaze back on the powerful, loving, and faithful Hands who were pierced for her.

One thought on “Her Story, His Glory: Jessi Licato”